Do I have sleep apnea? 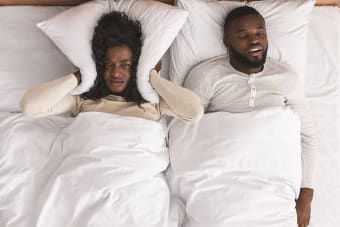 Are you finding that your sleep is being interrupted by your own snoring? Maybe you are actually suffering from sleep apnea! Sleep apnea and snoring have some key overlapping symptoms, nonetheless they are very different issues. Today our Delta dentists explain a little about the main differences between sleep apnea and snoring.

Both snoring and sleep apnea are conditions that cause disruptions to natural sleep patterns and leave people battling with the effects of poor sleep quality. However, it's important to note that not all snoring is a symptom of sleep apnea, and not all people suffering from sleep apnea will snore at night.

If your airflow becomes obstructed while you are sleeping and causes your respiratory structures to vibrate the sound that occurs is snoring. While snoring is one of the most common symptoms of obstructive sleep apnea (OSA), not everyone who snores has sleep apnea. Issues such as nasal obstructions, an elongated soft palate or a naturally large tongue can also cause snoring.

Sleep apnea is a serious sleep disorder characterized by shallow breathing or abnormal pauses in breathing while you are trying to sleep. Often sleep apnea sufferers are unaware that they are suffering from the condition until they are alerted to their symptoms by loved ones who sleep beside them. The sleep partners of people suffering from sleep apnea often experience many of the same side effects since they are likely to lose sleep and suffer from poor sleep quality because their partners sleep apnea symptoms keep them awake or wake them frequently throughout the night.

If you have sleep apnea, you could be suffering from 1 of 3 different types of sleep apnea. OSA, CSA and MSA are each defined by the cause of the abnormal breathing.

If you suffer from sleep apnea, chances are that you will notice one or more of the following symptoms:

During the day, many people suffering from sleep apnea feel fatigued and sleepy due to the poor quality of their sleep. Overwhelming fatigue which is often caused by sleep apnea can have some very negative impacts on the day-to-day life of sufferers. Reduced overall motivation, general alertness and work performance can often be the result of sleep apnea, and poor quality of sleep.

Sleep apnea is a potentially serious health condition that requires diagnosis and treatment from a medical professional. If you think that you may have sleep apnea contact our Delta office today to schedule a consultation.